Piggy-backing off of the success of crowdfunding sites such as Kickstarter and Indiegogo, as well as the momentum gained when the Sunflower Movement successfully funded a full page ad in the New York Times, Eric and I thought that this year we would try out crowdfunding for the Keep Taiwan Free Rally 2014.

We’ve always wanted to reach out to people with videos so this crowd funding one would be our first ever LEGIT promo video. It was a way to 1) promote the rally & movement and 2) seek donations.

Sound risky? We thought so too.

Regardless, we stuck firmly to our plans for creating this video and slowly but surely, this video is coming together.

Last Sunday I got up early in the morning (early for a Sunday!) and lugged Eric’s camera and sound equipment into NYC to meet up with our freelancer, Amy.

It was decided that Amy and I would first meet in the morning so that we could capture footage of me interviewing a number of random individuals about what Taiwan means to them.

I managed to interview a handful of people. One of which was Danish! Having traveled to Denmark myself 2 times a few years ago, we definitely had a good chit-chat.  He’s in our video!
Morale was high after my interview with him, but the next few people I asked were not too willing to take part. Amy suggested we move onto another location.

Next stop: One of my favorite parks, Bryant Park.
Please keep in mind this is all around 10-11am. And cloudy. The park was rather empty, but we did manage to get a few good interviews here. My personal favorite interview from this park was this guy from Boston with big orange hair. You guys will see him in the video as well! By this point, Amy made a good observation, telling me that I’ve only been outreaching to mostly guys (…sorry not sorry…?) so then we switched gears and I tried outreaching to girls. We strolled from Bryant Park over to in front of the New York Public Library.

While by the steps, an old lady went up to us and said to Amy, “Oh goodness! I went to China a few years ago, and I thought you were one of the girls I met there!”. And then continued walking away. She seemed pretty talkative and outgoing, a potential person to interview … so we followed her. Once we caught up to her, I explained to her what we were doing and if we could record her. Turns out this lady has quite the history! She told us about herself — how she traveled around Asia for a few months, how she used to be a dancer, and how she is a teacher. It’s a shame she was not willing for us to film our convo. Oh, the people you meet when you outreach!

By this point, lunchtime was approaching so we decided to head to our next destination: Washington Square Park. We first grabbed lunch along the way on West 4th.

After lunch, Amy and I sat around Washington Square Park, fighting off a food coma/hiding from the sun, when Amy pointed to a young lady sitting not so far away from us. Amy said to me, “Jenny..hey look…she’s pretty AND looks smart!”

…. so I approached her. Her name was Cheryl, and she happens to be super enthusiastic and a huge supporter of Taiwan as well! She’s from Singapore, and is traveling in NYC for the week. Amy and I had a great time chit-chatting with her – talking about travels, Taiwan, Singapore, and mostly food. (Check her out on Twitter and Instagram @cherylovescake, “thebakerwhocooks” on Facebook, and her website! Very passionate foodie!!)

Meanwhile, my friend Alex showed up and then Eric. Alex is a friend I met in Taiwan about 7 years ago at a summer camp. He always seemed quite interested and passionate about Taiwan so I decided that I would pluck him into getting involved with OFT and KTF. With the help and support of Cheryl and Alex, Amy filmed Eric’s and my talking portions of the video, as well as a few more interviews. 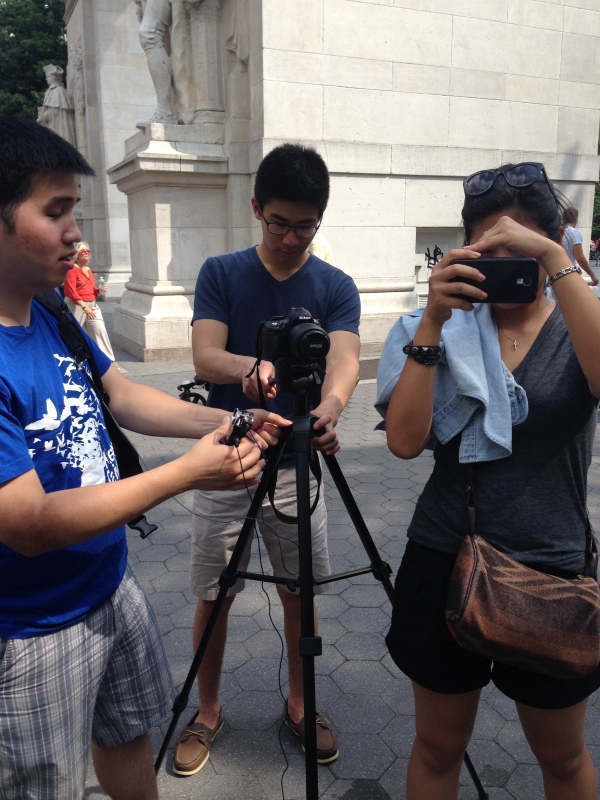 This group of people really was such a fun and good group of people to be spending my Sunday afternoon with. Cheryl was super supportive; Alex always gave the right amount of comic relief and constructive criticism; Eric and Amy are both really innovative people. I could not have asked for a better video-filming experience.

Not only that, but this experience also solidified (even more) my love (?) for outreaching. Not only do I get the chance to help spread awareness about a country that I’m so passionate about, but at the same, I’m given the opportunity to connect with some many individuals from all different backgrounds.

TL;DR
The process of creating this video has definitely got OFT pumped and excited for the Keep Taiwan Free Rally this year on Saturday, September 13. YOU SHOULD GET PUMPED TOOO!!!