The seventh month of the lunar calendar marks what’s known as the “Ghost Month” in Taiwan. During this month, the gates of the underworld open and spirits are released with the freedom to visit their family, loved ones, or just roam around. The 15th of the month is also known as “Ghost Day” when the Zhong Yuan Pudu Festival (中元普渡), or the Hungry Ghost Festival, is held at night. Though traditionally Taoist, the festival also has Buddhist roots. 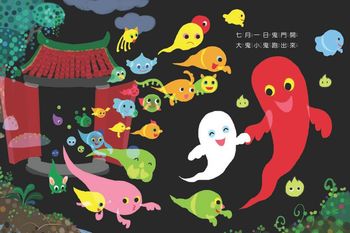 Since Ghost Month marks the month when ghosts can roam amongst the living, this month is often avoided for any weddings or childbirths, in fear that it may be inauspicious.

While Western societies often view spirits as malicious, in Buddhist Taoist culture, they are but passed away spirits that have not reincarnated yet. Any deceased, good or bad, will become a spirit.

While there are many festivals that pay respects to different deities and spirits, the Ghost Festival is special in that it also pays respect to spirits without any family. When a person passes away, it is up to the remaining family to pay their respects and provide food to the deceased. When this doesn’t happen, the spirits are considered homeless and their throats will shrink to the size of a needle. Any food that they attempt to eat will catch on fire in their mouths. However, during the Ghost Month, Buddhist Gods will extinguish the fire and expand their throats, allowing them to feast.

As a sign of respect, you should never refer to spirits as ghosts (gweǐ: 鬼), instead they are referred to as good brothers (hǎo xiōng dì: 好兄弟.)

Since this is a tribute to all the spirits in the area, temples will typically hold large gatherings allowing everyone to place their tributes on tables. Then, a Taoist or Buddhist priest (depending on the temple) will chant a mantra and invite the spirits to feast. There are four stages of tribute: 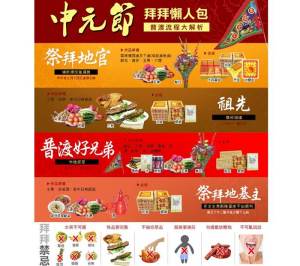 Each stage has their respective tributes. Below are some interesting tributes for the spirits:

A bento box or plate of a home cooked meal is typically offered as tribute to the Di Ji Zhu. This is often done by companies (especially factories) to ensure that job functions go smoothly and without any accidents.

It is also expected to provide spirits with a basin filled with water, towel, toothbrush, and toothpaste to allow the spirits to clean themselves.

Probably the most bizarre of tributes are the burlesque shows meant to serve as entertainment for the deceased. Typically seen only in rural parts of Taiwan, a stage will be set up near a temple and burlesque and pole dancers will perform. The first row will be left empty to ensure the spirits have front row seats.

Lily Lanterns come from Buddhist traditions and is used to guide homeless spirits to the afterlife.

House Lanterns are typically used for each household to guide any spirits of diseased family members to reincarnation. The family name will often be found on the lanterns.

The lanterns are placed in the water and lit on fire before they get pushed further. The further they go, the more blessings the one who offered the tribute will receive. In today’s modern society, there are usually scuba divers around to make sure the lanterns travel out into the water.

Note: The most famous water lantern release is in Japan, called Tōrō Nagashi. These are released during the Bon Festival, similarly to guide souls to the spirit world.

Mo Fa Ah Ma (Grandma and Her Ghosts) is a movie made in 1998 that centers around Taiwan’s Ghost Festival. You can use it as a way to understand Taiwanese culture and superstitions around spirits. Also, it’s just a cute movie about a young boy and his “Ah Ma,” or grandmother.

The video below shows the entire movie, but has closed captions only in Mandarin.