The largest student movement in Taiwanese history, the Wild Lily Student Movement was a major event that eventually led the Taiwanese government to reform into the democracy that it is today.

In 1986, members of the Tang-Wai movement officially formed the Democratic Progressive Party (DPP), despite the ruling Kuomintang party’s ban on opposition parties. However, the KMT did not take any actions against them at the time, leading to the DPP’s legalization in 1991.

In 1988, President Chiang Jing-Kuo passed away, and his vice president, Lee Teng-Hui, took over his presidential position. The next presidential selection was scheduled for 1990. However, at this time, candidates for President and Vice President of the Republic of China (ROC) were selected from the National Assembly (國民大會). The National Assembly had the nickname “Ten Thousand Year Assembly” (萬年國會) because no new local Taiwanese representatives had joined since the ROC’s retreat to Taiwan.

As momentous change unfolded around the world, Taiwan quietly underwent its own democratic reform.

Nine students from National Taiwan University (NTU) held a sit-in protest at the Chiang Kai-Shek (CKS) Memorial Hall. After hearing this, many other students and non-governmental organizations came to join them.

By the evening, 200+ students took part in the sit-in protest. Over 2,000 people were around to support them.

NTU liberals skipped class to attend the protests at CKS Memorial Hall, designating the week as a “civic education week” of real-world learning. Students from many other schools joined them.

On this day, the organizing committee made four demands: 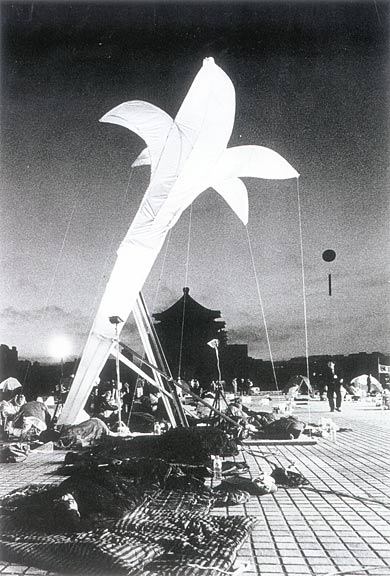 The protestors chose the Formosan Lily (Lilium formosanum) as the movement’s symbol for the following reasons:

As a species of lily native to Taiwan, the Formosan Lily reflected that the movement was homegrown, and thus autonomous from foreign ideals.

Found from the mountains all the way to the coast, the Formosan Lily reflected the grassroots aspect of the movement.

Formosan Lilies can bloom even in the worst of conditions.

The movement took place in the spring, when Formosan Lilies bloom. This characteristic of the lily also represented the students’ youth because of the spring season’s association with youth (the second character in the Mandarin word for ‘youth’, 青春, is the character for ‘spring’).

In the Lukai Tribe, an indigenous tribe of Taiwan, the Formosan Lily symbolized honor.

By this day, over 5,000 protestor had gathered at the CKS Memorial Hall. With the presidential selection scheduled for the next day, March 21, tensions were high. The government, department of education, and principals from all schools demanded that students resume attending classes.

Upon reviewing the footage of President Lee‘s meeting with the students, the organizing committee agreed to end the student movement on March 22.

A National Affairs Conference was held in 1990.

The National Assembly was disbanded in 1991.

The Temporary Provisions Against the Communist Rebellion were nullified in 1991.

These changes enabled a free and democratic election in which the Taiwanese people could cast their own ballots. In 1996, Taiwan held its first true democratic election, and President Lee was re-elected for his final term in office.