On January 16, Taiwan will democratically elect its next president. With 3 predecessors, the next president will have a legacy to continue. Who are these candidates? What makes each one so special? What are each candidate’s policies? Read below to find out more about the three candidates.

Click here to read about Eric Chu’s background in detail.

Click here to read about Tsai Ing-wen’s background in detail. 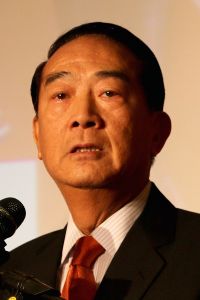 Click here to read about James Soong’s background in detail.

Hailing from Taoyuan County, Chu earned his PhD in accounting at New York University in 1991. He briefly was an accounting professor at City University of New York and at National Taiwan University. His political career took off from that point on; he served as a KMT legislator in the Legislative Yuan from 1998 until 2001, when he was elected as Magistrate of Taoyuan County. During his eight-year term as Magistrate, he also served briefly as the Vice Chairman of the KMT. Chu resigned as Magistrate to serve as Vice Premier, earning the distinction of being the youngest to hold the position. In 2010 he resigned his position to run in the mayoral elections in New Taipei City. After winning the election, he served as Mayor until October 19, 2015, when he put his mayoral duties on hiatus due to his presidential campaign.

On January 17, 2015, he replaced President Ma Ying-Jeou as Chairman of the KMT. He pledges to reform the KMT, largely due to its negative performance during the 2014 Mayoral elections and consistent low approval numbers. He has stated that his position is different from that of President Ma.

Eric Chu’s campaign surrounds the idea of “One Taiwan,” as it is his vision to focus inward rather than outward as President Ma had done. This vision is a change to the public’s perception of the KMT as being China-centric. Netizens and members of the public have criticized his campaign, saying that it mimics Tsai’s current campaign and disguises the KMT’s position that Taiwan is part of China via being under the ROC. Chu’s campaign has also been parodied as the KMT “declaring independence”.

Eric Chu has a track record of vowing to not resign during his terms in different political positions, yet he resigned from the New Taipei City mayorship in order to run in the 2016 presidential election. He also recently stated his aim for constitutional reforms.

After obtaining her PhD in law from the London School of Economics in 1984, Tsai taught law in Soochow University and National Chengchi University before being appointed as chairperson of the Mainland Affairs Council in 2000. In 2006, she was appointed vice president of the Executive Yuan and also served as chairwoman of the Consumer Protection Commission. She resigned from the Executive Yuan in 2007 and became the chair of TaiMed Biologics, a Taiwanese biotechnology company, before beginning her first term as chairperson of the DPP in 2008. She is currently serving her second term as chairperson of the DPP, and, through both terms of her chairpersonship, she has helped the DPP regain momentum. For example, in the local elections that were held on November 29, 2014, she led the party to secure leadership of 13 of Taiwan’s 22 municipalities and counties in a historic victory.

A supporter of LGBT rights and same-sex marriage, Tsai plans to continue deepening the Taiwanese localization movement and defending social justice, pledging to create an effective, transparent government that will “communicate fully with society so that citizens know [its] reasons, the necessity, and the effects of [its] policies.”  Additionally, Tsai promises to implement a new economic development model that will promote innovation and attract investment, along with legislative reform that will make the Legislature more representative of public opinion and better able to serve as a balance to the executive branch. Tsai also seeks to put an end to the lack of “mature political interaction” and “malicious fighting between political parties,” stating that she “absolutely will not sit and watch Taiwanese society be continuously torn apart by fighting between political parties.” She proposes to create a Reform Alliance that will recruit talent from everywhere within Taiwan to participate in governance and contribute to reform.

Regarding Taiwan’s international policies, she pledges that “protecting the ‘status quo,’ as the people of Taiwan define it, namely a democratic way of life, respect for human rights, and the rule of law, will be the principal objective of [her] cross-strait agenda, one which reflects the expectations of the Taiwanese people.” The KMT, as Tsai’s main opposition in the election, has on many occasions accused Tsai of being ambiguous about her stance on the cross-Strait issue and has demanded a clear statement.

She also promises to create legislation “to establish a comprehensive set of rules for overseeing the cross-strait exchanges and negotiations” (a key demand of the Sunflower movement) and emphasizes communication with the Taiwanese public and the US. Additionally, she envisions increasing cooperation between Taiwan and the US on all fronts and having Taiwan join regional trade agreements, especially the Trans-Pacific Partnership.

Soong, age 73, has a long history of serving in the ROC. His career began in 1974 as the Secretary to the Premier, where he was favored by Chiang Ching-kuo. In 1978, Soong became a household name for addressing the nation and condemning the United States after the US decided to break official diplomatic ties with the ROC in favor of the People’s Republic of China.

Before the first presidential elections, Soong ran for “Governor of Taiwan Province” in the position’s first and only popular election, defeating the DPP’s Chen Ding-nan. The position focused on developing infrastructure and managing the Bank of Taiwan, but, in 1997, it was given less responsibilities and changed into a provincial council appointed by the president.

Soong prepared to run as the KMT presidential candidate in the 2000 election, but the party supported Lien Chan instead. Feeling betrayed, Soong ran as an independent and was kicked out of the party as a result. Soong narrowly lost to the DPP’s Chen Shui-bian, receiving 36.8% of the votes while Chen won with 39.3% and Lien received 23.1%. With his impressive election results, Soong took his supporters and formed his own party, the People First Party (PFP).

The PFP and KMT decided to work together for elections in order to avoid the splitting of votes that occurred in the 2000 presidential election. Soong ran as the Vice Presidential candidate under Lien in the 2004 elections, but the duo narrowly lost to President Chen, this time collecting 49.89% of the votes compared to Chen’s 50.11%. Following this loss, the PFP began losing popularity in local elections, and the PFP-KMT partnership quickly fell apart. Soong’s popularity would never be the same: he ran for the position of mayor of Taipei in 2006 and only received 4.14% of the votes, and then ran for president again in 2012 under the PFP, only to get 2.77% of the votes.

Soong’s campaign focuses on finding a middle way, appealing to voters who are tired of the bickering between DPP and KMT. His goals include creating a true coalition government that is “non-ethnic, non-partisan, non-generational,” to push for constitutional reforms to create a stable foundation for the nation, and to build sustainable peace with China. In his bid announcement speech, Soong addressed internal issues, saying education should not be used “as a political tool for brainwashing and clipping the wings of the young” in reference to the recent education curriculum changes that sparked student protests, and that the income equality has to be addressed while not being too difficult on businesses.