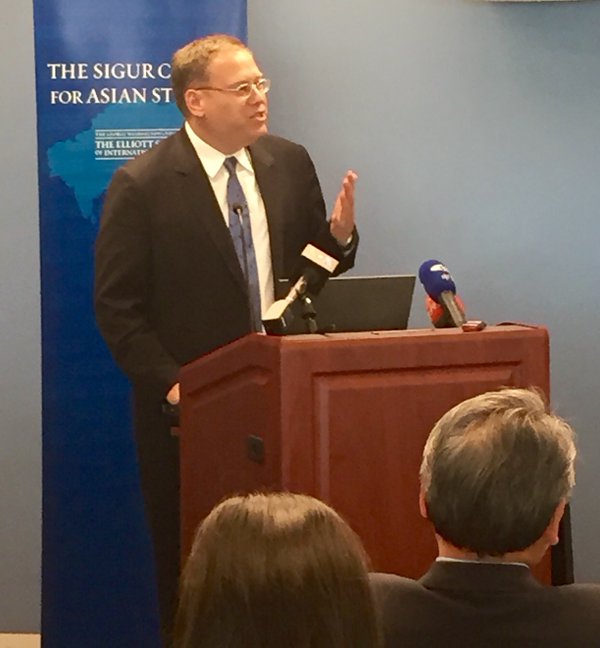 Listen to the audio of the panel!

This panel, held on March 2nd at the Sigur Center at George Washington University, shed light on the robust US-Taiwan relationship and the responsibility that Taiwan has shouldered in the international community. Kurt Tong of the Bureau of Economic and Business Affairs in the State Department asserted, “Based on the shared values between Taiwan and US commitment to democracy, civil liberties, and human rights—Taiwan has transited from aid recipient to major aid provider and played an irreplaceable role in women’s rights, humanitarian assistance, and global health.”

Taiwan-US Global Cooperation Training Framework (GCTF), signed last year on June 1, has paved one of the ways to international participation for Taiwan. This is a gateway with positive benefits for Taiwan since it has faced large marginalization in international matters.

Shifting focus from disease prevention, GCTF newest project will be women’s empowerment. Tong further elaborated, “The people in Taiwan have built a prosperous, free, orderly society with strong institutions worthy of emulation. Taiwan is a model for others, especially in women’s rights.” An international women’s empowerment conference took place on March 11th in Taipei. This conference discussed enhancing gender equality and supporting equal opportunities for all, coming right after Taiwan elected its first female president in January. Taiwan not only chose Tsai Ing-wen as commander in chief but also elected a record number of women to the legislature, which is now 38% women—the highest in Asia and nearly double the figure for the United States. These are the concrete evidences that Taiwan has put the concepts into practice.

Still, expanding Taiwan’s role on the international stage can be challenging, especially with Taiwan’s lack of international recognition. Nonpartisan international organizations, such as WHO, should remain neutral on the issue and shouldn’t exclude Taiwan from all WHO assistance. Take the severe SARS outbreak in 2003 for instance. It wasn’t until SARS was starting to spread rapidly that the WHO sent two of its staff to Taiwan to consult with Taiwan’s medical officials. The reason of the WHO’s reticence is of course the fact that the island is not allowed to be a member of an international organization.

It is all too common to assume that “Taiwan is too small to matter.” This view is somewhat misguided; Taiwan’s position is not as miniscule as people may have thought. The geographical size of Taiwan is larger than Belgium with a higher population than Australia. In terms of economics, Taiwan’s wealthy and productive populace—defined through its 2013 GDP per capita, both PPP and nominal, is higher than Germany and Portugal respectively. Taiwan is one of the top 10 major traders with the USA, out-trading India and Saudi Arabia. Praised as a technological leader, Taiwan is the world’s 4th largest computer hardware supplier and the world’s largest supplier of peripherals as well — transferring from “Made in Taiwan” to “Made by Taiwan”.

Perhaps in the eyes of international community the statehood of Taiwan continues to be a question open to debate. When asked by the media about the issue, most of the international organizations have replied that Taiwan is a “political question” about which they cannot “comment”. But by reducing Taiwan to so-called “Chinese Taipei” is clearly “commenting” on the issue. As long as Taiwan is admitted into international organizations, Taiwan would benefit from the aid from other countries, while sharing the load of responsibility.

Taiwan contributed on a broad array of issues not only in Asia-Pacific region but also with other key international players in areas regarding disaster relief, illness prevention, and the new foray into women’s empowerment. Together, through natural and social sciences, the international community and Taiwan would create a better world. What remains is Taiwan’s under-recognition of its achievements and contributions. It therefore should grab the chance to increase awareness of herself through the incoming new voice of its newly elected legislative and executive branches.