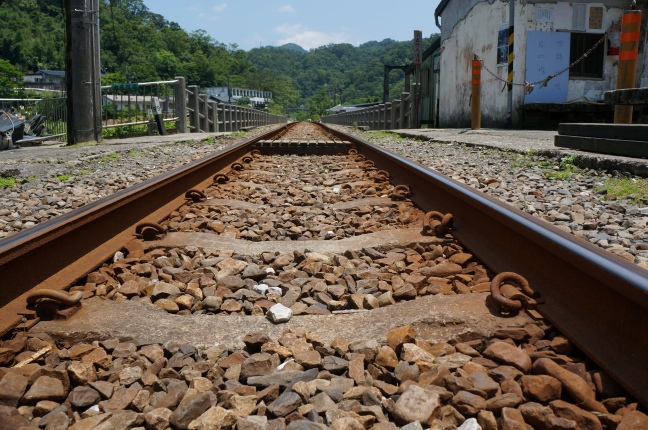 As we always say, Taiwan is more than just bubble tea and nightmarkets! Usually when I visit Taiwan, I spend most my time visiting relatives, so I end up planning my activities near on their locations. On my last visit, I was determined to check out new places I hadn’t seen before and discovered quite a number of interesting and enjoyable locations just east of Taipei.

History of the northeast coast

Historically, the northeast coast of Taiwan was known for ocean access and mining, and because of these two factors, it was heavily developed and lays claim to having the first railway system in Taiwan. The Qing Dynasty began construction on the first railway system in 1887 in order to link Taipei to Keelung’s harbor, and Japan continued the its development to facilitate the transportation of the mined resources. Houtong was a coal-mining town while Jiufen was a gold-mining area. However, the mines were exhausted within the past 40 years, leading to a dramatic transformations in the towns that only knew of mining.

Similar to how “Upstate New York” refers to the entire state of New York except for New York City and Long Island, New Taipei City is not a city but a special municipality that covers “everything else” in the greater Taipei area outside of Taipei City and Keelung City. It used to be plainly called “Taipei County” but was changed to its present name at the end of 2010. With that being said, you will see New Taipei City in many addresses, but it’s more important to know the town and district you want to visit. 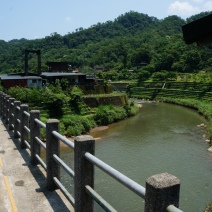 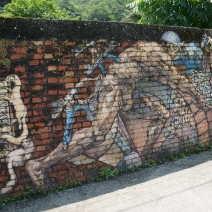 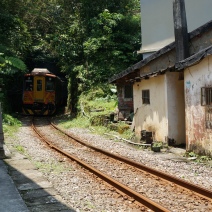 Sandiaoling (三貂嶺) is located along the Keelung River and offers a mountain backdrop, which isn’t uncommon in Taiwan, but adds to the beautiful scenery. Due to time constraints and not enough about the area ahead of time, I could not walk the namesake trail; I only walked around the entrance area that includes the train station (platform would be a better way to describe the stop), a bridge, and a few residencies. Sandiaoling itself is a trail known for its 3 waterfalls and takes approximately 2 hours to hike through. However, this area is absolutely serene. The train runs along the river and is a great place to spend a day if you want to practice photography or just want some time away from the bustling cities. I plan on coming back in the future to check out the trail and perhaps walk along the river.

To find out more about the trail, check out these sites: 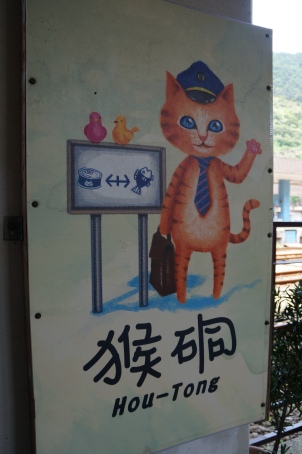 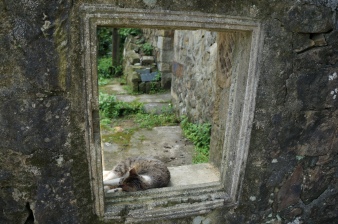 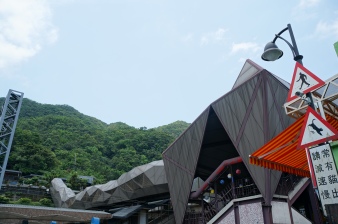 The village of Houtong (猴硐) translates to “Monkey Cave,” because there was actually a group of monkeys living in a nearby cave. Nowadays it’s famous for being the stomping ground (“napping ground” would be more accurate) of approximately 100 stray cats! Houtong was a booming coal-mining town until the 1990s and was mostly abandoned after the mines were depleted, leaving behind pets such as cats. In 2008, a local cat-lover organized volunteers to give the abandoned cats a better environment, and the pictures they took went viral, making Houtong an instant unique tourist attraction.

When you arrive at Houtong, you will see the remnants of the coal factory and a modern train station with a “cat walk” overpass. The overpass is used to reach the down from the station and is decorated with large painted “cat bells”–I did mention this is a cat-themed town, right? When you reach the town, you’ll suddenly feel an overwhelming sense of duty to look under every chair and in every corner for catizens.

Read more about the village and see more cat pics:

I took the train to Fulong (福隆) with my father to check out the annual International Sand Sculpture Art Festival, which takes place this year May 7-July 10. My dad ended up telling me about going to Fulong Beach when he was in college–it was a popular destination for students, kind of like how Florida is the destination for Spring Break. The sand sculptures are quite impressive: some are massive in size but still exquisitely detailed, and nearly all of them have designs from multiple sides, so be sure to walk around and don’t feel obligated to stay on the wooden path!

During the period of Japanese occupation, Taiwan was introduced to Japanese lunch boxes called bento, which became known as biandang (便當). These lunch boxes became a staple throughout train systems and mining towns; today, it’s a popular tourist meal to try at the aforementioned locations. Just outside of Fulong’s train station on the way to Fulong Beach, there is massive competition among stores to sell so-called famous Fulong Biandang (Bento Box); even storefronts that were clearly once residencies or offices for other functions are now selling them. I did not find my biandang particularly special, but it was certainly cheap and filling–Dad approved.

Fulong Beach is one of the few beaches with golden sand in Taiwan and hosts the International Sand Sculpture Art Festival (pictured) and Hohaiyan Rock Festival. The beach can be used for a variety of watersports such as surfing, kayaking, and canoeing (rentals are available), and the Caoling Historic Trail (草嶺古道) offers views of the Pacific Ocean. 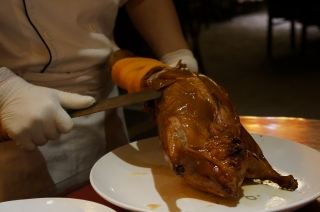 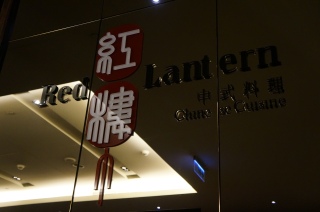 The city of Yilan was established by the Qing dynasty in 1810-1811, but due to being isolated by mountains, Yilan County as a whole had a fairly uneventful history. In the recent years, a major highway tunnel system was completed, improving travel between Taipei and Yilan, and King Car Beverage Company’s Kavalan whisky, whose distillery is located in Yilan County, has taken the whisky world by storm.

My one and only stop in Yilan this trip was the Red Lantern Restaurant in the Silks Palace Hotel so I could try the famous “roasted cherry valley duck.” Reservations are highly recommended, especially if you want to go on a weekend. Red Lantern carves up a beautiful roasted duck tableside and proceeds to serve it multiple ways. The most memorable was duck skin sushi/nigiri: the crispy, succulent duck skin is wrapped around sushi rice and sauce–after the first bite, I immediately proclaimed it was worth the visit. Yilan also takes pride in its scallions, so many dishes include it.

Yilan is also famous for a cookie that translates to “cow tongue cookie,” niu she bing (牛舌餅), and yes, as you should expect of a Taiwanese city, there is a nightmarket: Dong Men Night Market (東門夜市). Yilan also offers plenty of other activities and sights, which is why Taipei-ers enjoy visiting on the weekend: museums, waterfalls, lakes, mountains, hot springs, and even a cold spring.

I just shared the sites that I visited over the span of 2 days while staying in Taipei, but there are many more attractions in the northeast coast that I have enjoyed before or piqued my interest.

Finally, you can check out a Google Map of all locations mentioned in this article.