Outreach for Taiwan has partnered up with the community and artist, Liu Tsung-Jung (劉宗榮), to promote Taiwan’s situation through Artwork.  Below are the postcards and all descriptions were provided by Ketty Chen. For more information, please contact us.

Sunflowers sprung on the floor of the Legislative Yuan. This painting is artist Liu Tsung-jung’s interpretation of the recent student takeover and occupation of Taiwan’s Legislative Yuan to protest the lack of transparency over a trade deal the government signed with China. The Sunflowers symbolized casting light to the existing government institutions and Taiwan’s democracy, as the students hoped to also bring sunrise to the beautiful island of Taiwan. 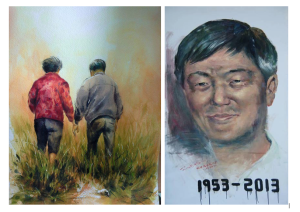 Mr. Chang and his wife’s frugal, small yet perfect life was shattered when the county government, in its attempt to expropriate their land, forcibly demolished the small pharmacy they owned and the house they lived in for more than three decades. The stress from the years of protest with no avail, the government’s broken promise and losing everything he has worked so hard all his life for led to Mr. Chang’s demise. January of this year, the high court finally ruled the county government’s forcible demolition and acquisition of the Chang’s land as illegal. For Mrs. Chang, the delayed justice is a denied justice, as she will never feel her husband’s tender caress again.  She vowed to continue her husband’s fight for land justice for all.

Democracy is maintained and kept safe by the citizens’ joint efforts. It is through awareness and the joined hands of members of society that democracy is able to flourish and grow. 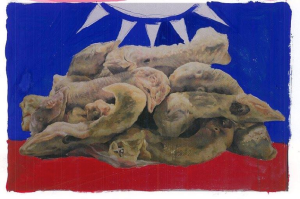 “If You and I Remain Silent- Lives in Exchange for Freedom”

This painting is a reflection and interpretation of the February 28th Massacre (1947) and White Terror Era (1947-1986) in Taiwan. The painting is not only artist Liu Tsun-jung’s advocacy for the right to life; it is also Liu’s way of paying respect to the victims and those who were persecuted by the Republic of China government. Liu dedicates the painting to those who perished during the 228 Massacre, to Nylon Cheng who self immolated for the freedom of press and expression, and for the Changs, whose home and life were destroyed by the government’s insistence to expropriate without legitimate need or reason.