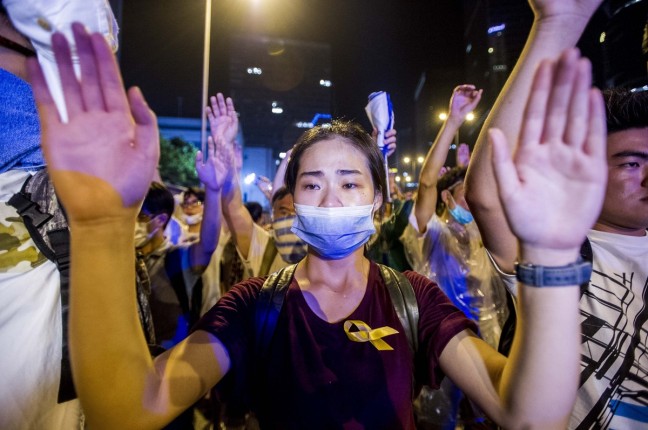 As protesters in Hong Kong brave tear gas, pepper spray, and police brutality in the Occupy Central Movement, the people of Taiwan are reminded of the Sunflower Movement that swept through their nation only six months earlier. In both movements, the demonstrators seek to protect their democracy by challenging an agreement or political reform that they consider to be unfair or dangerous for their country. Although there are differences between the movements in Taiwan and Hong Kong in terms of objectives and expectations, in both cases, the youth have mobilized to demonstrate to the elder generations that rule them that they are interested in politics and have become a force to be reckoned with.

Since Hong Kong was returned to Chinese rule by Britain in 1997, Hong Kong residents have enjoyed rights not available anywhere else in China under the “one country, two systems” model. However, China’s increasingly assertive control of Hong Kong has significantly reduced the opportunities available to Hong Kong residents; the dominance of pro-Beijing businessmen and real estate developers in the legislature and the electoral college has resulted in several long-standing economic and social problems. After Chinese buyers pumped up the housing market in recent years, standard apartments are now selling for a record 15 times the national average household income, making ownership a distant dream for graduates. The wealth gap is also widening; according to a government report last September, one in five residents (about 1.3 million people) are living below the poverty line. Frustrated by their increasing lack of political freedom and career development opportunities and angered by China’s tightening grip on the city, the young people of Hong Kong have become increasingly supportive of Hong Kong’s growing pro-democracy movement, widely rejecting identification and integration with China. This past July, more than 500 people, many of them students, were arrested for staging a street sit-in as part of the biggest protest march in Hong Kong in a decade.

On August 31, the Chinese legislature proposed changes in the Hong Kong electoral system so that, starting from the 2017 Hong Kong chief executive election, all candidates must be endorsed by more than half of a 1,200-member election committee that is dominated by pro-Beijing elites. This proposal, which would effectively ensure that the five million eligible voters in Hong Kong cannot vote for any candidate that is not pre-approved by Beijing, sparked college freshman Joshua Wong to lead thousands of students in a protest march and rally. When threats of further protests failed to yield any concessions from leaders in Beijing, the Hong Kong Federation of Students (HKFS) led thousands of Hong Kong university students in a rally on Monday to kick-start a five-day boycott of classes. Additionally, Wong’s student activist group 學民思潮 Scholarism led more than 100 teenagers in a week-long boycott of secondary school lessons as part of a larger civil disobedience movement to, as HKFS secretary general Alex Chow explained, “wake up society – let them know our city’s death knell is ringing.”

As part of their campaign, the students requested that Hong Kong Chief Executive C.Y. Leung meet with them to discuss Hong Kong’s democratic future. When Leung refused to meet the students’ request, 4000 students and citizens marched to Leung’s house on Thursday in an attempt to initiate dialogue. Leung’s further lack of response prompted more than 100 students to storm the government headquarters in an attempt to reclaim the Civic Square. They clashed with police, who used pepper spray, shields, and batons in a violent attempt to drive the unarmed protesters out of the square. The police also seized and arrested Wong and forcefully dragged him away on Saturday, but he was released from police detention without charge earlier today. When Hong Kong’s largest pro-democracy group, Occupy Central with Love and Peace, blockaded the Central financial district this morning, the police used tear gas, pepper spray, and batons on the protesters, threatening to shoot them with plastic bullets if they resist further. There are reports that the police have purchased anti-riot weapons such as a sound cannon.

The escalating events in Hong Kong resonate deeply with the Taiwanese people, who have also been fighting their own battle for democracy. Ever since the Kuomintang (KMT) party retreated to Taiwan in 1949 as a result of losing the Chinese Civil War to the Communist Party of China (CPC), Taiwan has struggled to establish its political independence. Due to pressure from China, many nations and international organizations, such as the UN and the World Health Organization, do not officially recognize Taiwan, preventing Taiwan from reaping the social, political, and economic benefits that it deserves as an independent nation. President Ma has further exacerbated the problem since his election in 2008 by pushing to increase Taiwanese dependence on China, despite opposition by the Taiwanese people.

This past March and April, the frustration of the Taiwanese people exploded in the Sunflower Movement, during which students occupied the Legislative Yuan for a month to protest the unlawful passing of the Cross-Strait Service Trade Agreement (CSSTA), a trade agreement with China which would have jeopardized the livelihood of tens of millions of Taiwanese people and threatened Taiwanese democracy. The students and hundreds of thousands of protesters demanded that President Ma and the KMT party rescind the trade agreement and allow public line-by-line review of the trade deal; supporters across the world rallied to provide emotional and material support for the Sunflower Movement. After Legislative Speaker Wang Jin-pyng finally promised to delay the passage of the CSSTA until legislation monitoring all cross-strait relations has been passed, the protesters cleaned and vacated the Legislative Yuan to continue the movement in the broader Taiwanese society and in the international community.

The Sunflower Movement served as a source of inspiration for the Occupy Central Movement; during the summer, several Hong Kong activists travelled to Taiwan and met with Sunflower Movement participants. The recent developments in Hong Kong echo the Sunflower Movement’s efforts to protect democracy, and the Taiwanese have responded accordingly. Several Taiwanese universities have launched an online petition and a lecture series, among other activities, to support the campaign in Hong Kong, and the Democratic Progressive Party (DPP) of Taiwan has also voiced its support. As Tien-lin Chao, the China Affairs Department director of the DPP, explains, “Democracy is a value that goes beyond borders… Having traveled on the same road to democracy, the people of Taiwan understand how hard it is, and can feel how the people of Hong Kong feel — dreams of democracy may be repressed, but will not disappear… We will continue to show our concern and support for the pursuit for democracy.”

Despite the arrests and police brutality, the students in Hong Kong are determined to continue their acts of civil disobedience and intensify their campaign until Hong Kong obtains true democracy; as Chow explains, “We have to tell them that Hong Kong people are willing to sacrifice much more.” Occupy Central co-founder Benny Tai vows to stay with the students until the last minute and is prepared to be arrested, saying, “We are willing to pay the price for civil disobedience.” HKFS, Scholarism, and various student associations have called for a city-wide student strike, and the Hong Kong Professional Teacher’s Union announced that it will go on strike on Monday to protest the police’s brutal handling of the protests. Tens of thousands of Hong Kong residents have rallied with the students to provide emotional and material support, and hundreds of thousands of people across the world gathered yesterday in solidarity for Hong Kong, calling a Global Solidarity Day to support the ongoing battle for democracy through public outreach events and social media platforms. As Wong shouted hours before he was taken away, “The mission of fighting for universal suffrage does not rest upon the young people, it is everyone’s responsibility… I don’t want the fight for democracy to be passed down to the next generation. This is our responsibility.”
For coverage of the ongoing strike in Hong Kong and up-to-date info on events in your area, visit 全球聲援香港爭取真普選 United for Democracy: Global Solidarity with Hong Kong.