On April 17, 2014, Columbia University’s Taiwanese American Students Association (TASA) and Hong Kong Students and Scholars Society (HKSSS) joined together to host a panel talk about Taiwan’s Sunflower Movement and it’s implications to Hong Kong. OFT came to attend this talk and had the opportunity to hear from three great panelists.

Here is a bio on each of the speakers taken from Columbia TASA and HKSSS event brochure: 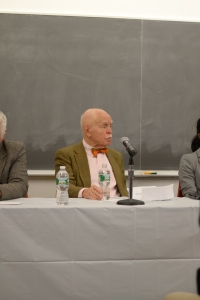 Professor Jerome Cohen – Professor Cohen is a pioneer in Chinese legal studies. He has played an instrumental role in advancing the diplomatic visits President Nixon and Senator Ted Kennedy paid to China. He has taught and inspired many major figures, including Taiwan’s President Ma Yingjeou and former U.S. ambassador to China Clark Randt. His legal advice has led to the release of Chen Guangcheng, a blind Chinese human rights defender who was held hostage by the Chinese government.

Professor Murray Rubinstein – Professor Murray Rubinstein is a leading scholar on Taiwan. He has written extensively on the political and economic developments in Taiwan. He has personally worked with many of the political figures that heavily influenced the democratization of Taiwan, including Former Vice President Annette Lu.

Ms. Yu-Jie Chen – Ms. Yu-Jie Chen works closely with Professor Jerome Cohen at the U.S.-Asia Law Institute as a Research Scholar, and has greatly expanded the Institute’s Taiwan focus. She previously served as a researcher and advocate for a non-governmental organization, Human Rights in China, and has practiced in the Taipei-based international law firm Lee and Li. She is currently a J.S.D. candidate at New York University School of Law.

The panel talk opened up with a video from Vice News. Followed by each panelist talking about their thoughts on the movement. Each had their talking points on very different parts of the movement.

First to talk was Professor Cohen. Cohen talked mainly of Taiwan as an entity rather than just the movement. Having taught current President Ma, Cohen spoke a lot of his former student’s current government. The topic of executive branch and legislative branch was heavily discussed. At this point in time, is the Taiwan constitution in need of revision? Does there need to be more intervention from the legislative branch in negotiations done by the executive branch? What is the relations of political party and the government operations? He poses these questions to us as well as to the Taiwanese government because he realizes the issue with Taiwan’s politics is that it is too bipartisan (makes US politics seem almost amiable).

Next Ms. Chen talks about the Sunflower Movement in terms of why did it start, what are its implications for cross strait relations and the long term impact of it. She notes that from the beginning of Taiwan politics, it has been a fight of Kuomintang Party (KMT) and Democratic Progressive Party (DPP), but this protest is one that brings forth an issues greater than just that, it is the issue of transparency within the Taiwanese government. The lack of transparency is the root cause of this issue and couple other major issues in Taiwan.

Last panelist, Professor Rubenstein, talks about the past and future of Taiwan. He walked us through what he called the waves of changes that Taiwan has gone through. This history starts with the 500,000 aboriginal tribes 400 years ago to the Holland and Dutch occupation as an economic trade post to the East. Next came the Qing dynasty occupation when there became a divide between 3 main ethnicity: Han, Hakka, Ming Nan. Wave 4 led to the opening of Taiwan during the time of the opium war, leading to a developing Taiwan with influences from USA and Great Britain. Next up was the Japanese occupation. During this time, Japan treated Taiwan as a part of their great empire, modernizing the land and teaching the people their language. In 1945, the Republic of China  wave brought held high tensions in the island of Taiwan breaking out during the 228 incident. As the power in China grew, so did the concerns of United States, so they came to assist Taiwan and helped Chiang Kai-Shek focus his budget not on efforts to reclaim China but to improve Taiwan itself. Years later it led to the Taiwan as we know it, still a country with a young and growing democracy.

After the panelist talked, the floor given to student Larry Hong as he talks about the impact of Taiwan’s Sunflower Movement and its relations to Hong Kong.

All in all, this panel had quite a lot of information. I would like to thank Columbia University’s TASA and HKSSS for hosting this panel talk.