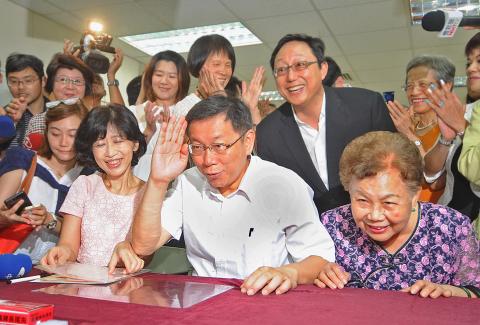 Election day is getting closer. Every word spoken by the candidates determines their victory or defeat. In the case of Taipei mayoral candidate Ko Wen-je (柯文哲), his recent remarks on the late Chiang Ching-kuo (蔣經國) on Sept 3rd and Chiayi mayoral candidate Chen Yi-zhen (陳以真) three days later has the potential to derail his chances at winning the election.

Although Ko had only focused on Chiang’s relationship with business

leaders and his view on  government officials’ ethics, Chiang remains a very controversial figure. Chiang is the son of Chiang Kai-Shek and was the head of Taiwan Garrison Command from 1950-1965 (essentially the secret police during the White Terror period of 1947-1987). Opinion of Chiang Ching-kuo therefore is higher amongst pan-blue supporters rather than the pan-green side which Ko has the support base of. Trying to gain support from the opposite side is understandable, but Ko needs to be careful with his words; it is a huge risk losing support from his core supporters for the gain of a few from the opposition. He inflicted damage both on himself but more so on the DPP, which had endorsed him rather than having their own candidate. It is one thing to say something controversial, but it is wholly erroneous to support something that the main backer has a less than favorable view of. It would be like a liberal Democrat supporting deregulation of gun control laws to pander towards the conservative vote.

His statements on Chen similarly comes from not being careful of his words. He stated that although Chen is “young and beautiful” and “very suitable to sit behind the front desk or appear in an advertisement”, she may not be suitable to be a mayoral candidate due to lack of experience. This statement is not only sexist but hypocritical since Ko himself has no political experience. Female voters might take him as a male chauvinist and refrain from supporting him, an act that has a huge effect on Ko since the elections are won by majority vote.  He has said that he would improve his communication skills, but given his past sexist comments from sources such as his book Power of White it remains to be seen whether he would really change or not. In a predominantly patriarchal society like that of Taiwan, few rights for women were enshrined in the law. Ko has the potential to address this issue, but he needs to change his image to that of change. His own sense of humor may have worked in the past as a doctor, but as a politician he needs to change his words; people understand others only through words and actions.

Ko currently has a double digit lead over the KMT’s candidate Sean Lien (連勝文). This gap in the polls is indicative of the intense mayoral race in Taipei. Any slip-up and Ko’s opponents would jump on to bring him down. Ko’s lead is due in small part to Sean Lien’s campaign in which Sean’s comments and advertising are full of slipups that proved self-harming. The momentum at this point therefore seems to be favoring Ko, but the road to Taipei Mayor is still long and anything can happen.