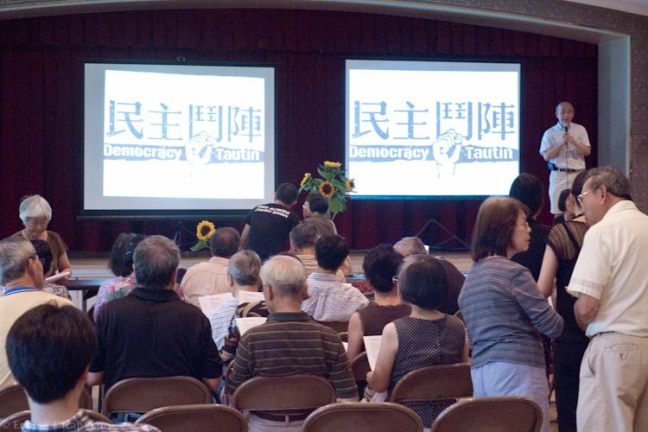 “Taiwan is my country, pure and simple. Whatever your race is, Taiwan, as a diverse society, has gained the love of all its people. They all identify themselves with the idea of Taiwan.” – Wang Yung-Hsiang (王雲祥) of Democracy Tautin

This past weekend, OFT drove down to Central Jersey to attend a talk hosted by Rutgers Taiwan Study Association (TSA), Formosan Association for Public Affairs – NJ (FAPA-NJ) and Taiwanese American Association of NJ (TAA-NJ). This event invited Democracy Tautin, a non-governmental organization from Taiwan, to come and tell everyone about what their organization is about, and to also give us some insight about how everything was like inside the Legislative Yuan during the Sunflower Movement in Taiwan.

Democracy Tautin (民主鬥陣) is dedicated to protecting Taiwan’s future, freedom and democracy through education, grassroots advocacy and youth empowerment. They consist of 60+ students, all of which were actively involved with the Sunflower Movement. Of those 60+ students, 4 were at the event to talk to us. Each and every one of them had their own unique skills that they took to the floors of the Legislative Yuan. Each and every one of them are extremely passionate in everything that they are doing for Taiwan.

Lee Chun-Ta (李俊達), but commonly known as “Cheetah”, is the General Coordinator of Democracy Tautin. He delicately explained to us “the soil and seeds of the Sunflower Movement” – such as what were the movements’ major demands? Or where did the name Sunflower come from? He emphasized how the passing of the Cross-Strait Service Trade Agreement (CSSTA) is not just a economic issue, but also alarmingly a political and social issue. After sharing the background information about the Sunflower Movement, he went on to share with us how everything was inside the Legislative Yuan and how everything was highly organized. For example, we learned that they had an international media & a mass media team, a medic team (specializing in BOTH Western and Eastern medicine), an internet team, a team of volunteer attorneys, a translation team (from Mandarin to 14 other languages!), and they even had a materials team, which helped coordinate donations of food and other materials. Impressive! 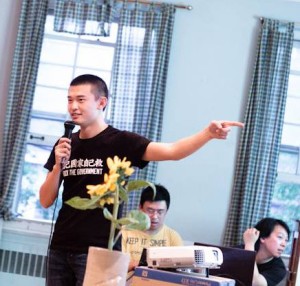 Wang Yung-Hsiang (王雲祥), who handled security inside the Legislative Yuan and is also Coordinator of Action for Democracy Tautin, used his excellent public speaking skills and boyish charm while sharing some of his personal anecdotes about his experience during the Sunflower Movement. One particular story that stuck out was how one day, him and the rest of the security team found a bottle filled with gasoline, disguised as a bottle of tea. They would find all sorts of hidden weapons while they were working on securing the building. In addition, sometimes gangsters would come to harass the peaceful protestors but the police would do nothing to stop the harassment. Because the police were not doing their job to protect the people, ordinary citizens, such as Wang, have taken to themselves to help regarding security.

The Coordinator of International Affairs of Democracy Tautin, Cheng Kai-Jung (鄭凱榕), also known as “Karen”, utilized her translation skills and the skills she gained while working with other NGOs to help translate during the Sunflower Movement. Because she managed to build a great rapport with the directors and others at Free Tibet previously, they helped provide her a list of international media contacts so that reports could get the news out to others around the world about the Sunflower Movement. The first international press release regarding the Movement was released on March 26. Along with Karen, there was a team of 100 other translators. Overall, everyone that took part in the movement was highly organized – holding meetings to “strike a compromise between being democratic and being efficient”.

“I never understood the meaning of [being a translator]…until this movement”, Wang Niang-Kai (王年愷) exclaimed. During the movement, he was one of the many translators who felt motivated to spread awareness of what was going on. His voice was soft-spoken but his words were strong and passionate. He told us that although at times he felt scared and almost helpless, he found himself constantly not giving up and typing translations for hours on end. 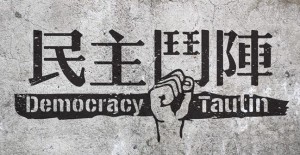 “Tautin” in Taiwanese means “together”. Democracy Tautin hopes to sow the seeds of democracy and spread it to all corners of Taiwan by educating the next generation.

Hopefully, a truly democratic Taiwan can one day be achieved…together.

To view “The Soil and Seed of Sunflower Movement” presented by Lee Chun-ta of Democracy Tautin:  http://prezi.com/evml3pq5fb_d/soil-and-seed-of-sunflower-movement/

To read the English transcript of the event: https://docs.google.com/document/d/1ZVWjnGEb4InBJUyXE60QwEWSB-uUIeZcR1bp-Qo-eeM/pub

Special thanks to Micah Hong of New York City for taking these pictures!