2013 was an unique year because not only was there a Taiwan Week – a series of events everyday of the week leading up to the 2013 Keep Taiwan Free Rally – but that there was even a march leading up to the rally on rally day!

On rally day, a huge crowd, consisting of both young and old, first met at the United Nations Plaza (Dag Hammarskjold Plaza). From there, the crowd marched and chanted all the way to Times Square for the rally!

The KTF team prepared postcards which encouraged the crowd to share why they felt that we should “keep Taiwan free”. 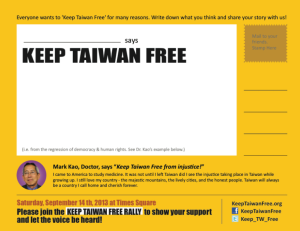 2013 was also the year that the adorable Formosan Black Bear image was created by Lu-An, a member of the KTF team in 2013. Since the image’s creation, it has become a beloved symbol for the movement. 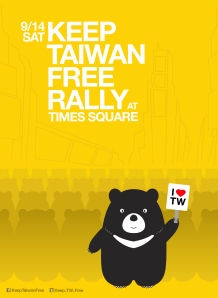 Great job to the KTF2013 team! Hope to see you join us for the Keep Taiwan Free Rally and events for 2014!