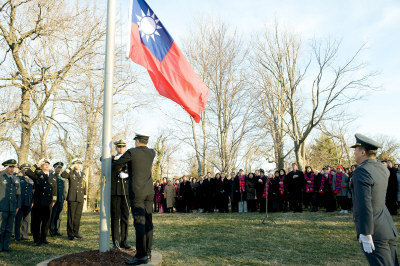 On January 1 2015, there was a private flag-raising ceremony held at Twin Oaks at Washington D.C. in which the Republic of China (ROC) flag was raised. The attendees were all from Taiwan; members of the Taiwanese military and the unofficial embassy called TECRO were present. Twin Oaks was the former residence of ROC ambassadors to the United States and is still owned by the ROC after diplomatic relations were cut in 1979. The building currently serves as a venue for unofficial cultural and social events related to Taiwan.  The controversies surrounding this event were the raising of the ROC flag and the awarding of medals to uniformed Taiwanese officers since the grounds are viewed by the United States as a “representative compound” rather than a private home.

Although the specifics remains vague due to the unique relationship it holds with both China and Taiwan, the United States immediately distanced themselves away through denying any role in the event. The State Department publicly stated the ROC had not given them any notification or request of the ceremony, further elaborating that the action was “not consistent” with US policy. The American Institute of Taiwan expanded the viewpoint of the United States by confirming that while the United States had not received any requests for the ceremony, it also does not want to see such flag-raising happen again unless there are official diplomatic relations. For the ROC, this was viewed as a negative response since it further constricted their display of sovereignty.

The Taiwanese Representative to the US, Shen Lyu-shen, at first stated that the United States was informed and approved the action so long as it was low profile and was not televised. When he was questioned about the event in the Legislative Yuan, he admitted that the United States was actually not informed as an act of goodwill, so the US had deniability of approving the action. During the ongoing discussion about the display of the ROC flag at Twin Oaks, he stated that it had also been on display last year at the ROC’s National Day event with little press coverage and US officials present. The government is currently conducting damage control on the matter, calling it an “isolated incident” in its “surprise-free” policy towards the United States.

Viable options include replacing Representative Shen or the US bypassing Shen and talking directly to the government.

Article reporting on the flag-raising ceremony

AIT’s statement on the event

Responses made by the Representative during a legislative session in Taiwan